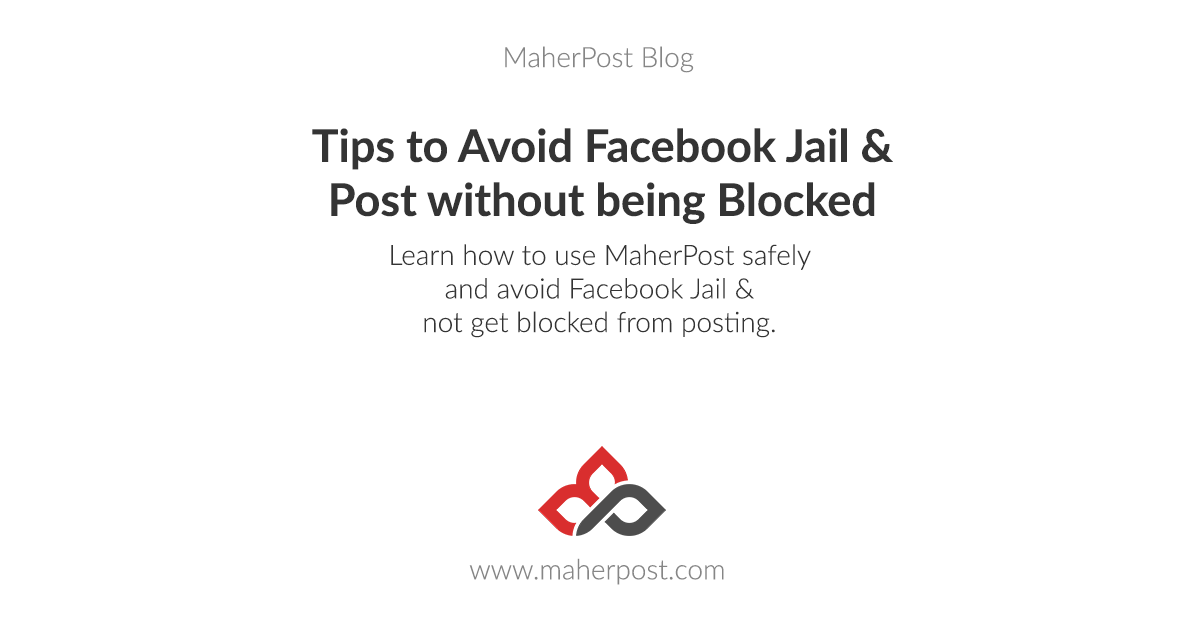 There are two kinds of blocking; one is permanent and the other is temporary.

In the case of permanent blocking, the user is blocked permanently and he or she cannot access his or her particular service or account again in any way. Permanent blocking is particularly for spammers as well as hackers who try to play with the Facebook security.

On the other hand, temporary blocking would disable one’s account or a service for a certain period of time. The account or the service can be accessed again after the restriction removes.

To exemplify, if anyone posts unnecessary or offensive things in groups or posts too much, the user might be blocked for posting new things in future and such restriction would last for some days (Maximum of 21 days to be exact).

Facebook jail will last just a few days and after that, you’ll regain control of your postings. Facebook Jail lasts for 21 days maximum.

Here we are sharing the best practices you should keep in mind to prevent your account getting blocked from posting to groups and avoid Facebook Jail.

Having half-setup profile will always flag your profile as not complete. If you post to lots of groups through a profile which is not up to date, it could make Facebook believe that you’re only using your account for posting to groups and that’ll be seen as spam.

So you should make sure to have your details are up to date and that you have added all info to about page and on the profile page.

This is an obvious one. The only verification of your existence that Facebook has is your mobile number. If you connect your mobile number with Facebook, they will know that it’s a genuine person and not some fake account.

If your account is not verified by mobile and email, it’ll surely make it difficult to post to groups without being blocked for spamming.

The trick to avoiding “imprisonment” is leaving at least some minutes between every post. If a user is pushed for time and simply have to get the work done right on time, then he or she can basically schedule posts minutes, days, hours or also long in advance.

Posting at an alarming degree to the Facebook page, your facebook wall or groups can bring your active account under scrutiny. The Longer will be the time in between the post, lesser will be the chances to throw in the Facebook Jail.

MaherPost has made this aspect much easier by rendering the option to schedule your posts and adding time interval.

You can schedule your post to be posted at the time you want on AutoPilot with the help of MaherPost Facebook Auto Poster. You can post new messages to groups right away live on your computer or schedule them to be automatically posted at the desired time.

The Post interval is a very useful feature. You can set the time interval from minutes to hours. Once you select a post interval, your posts will be sent to each group based on the interval you selected. 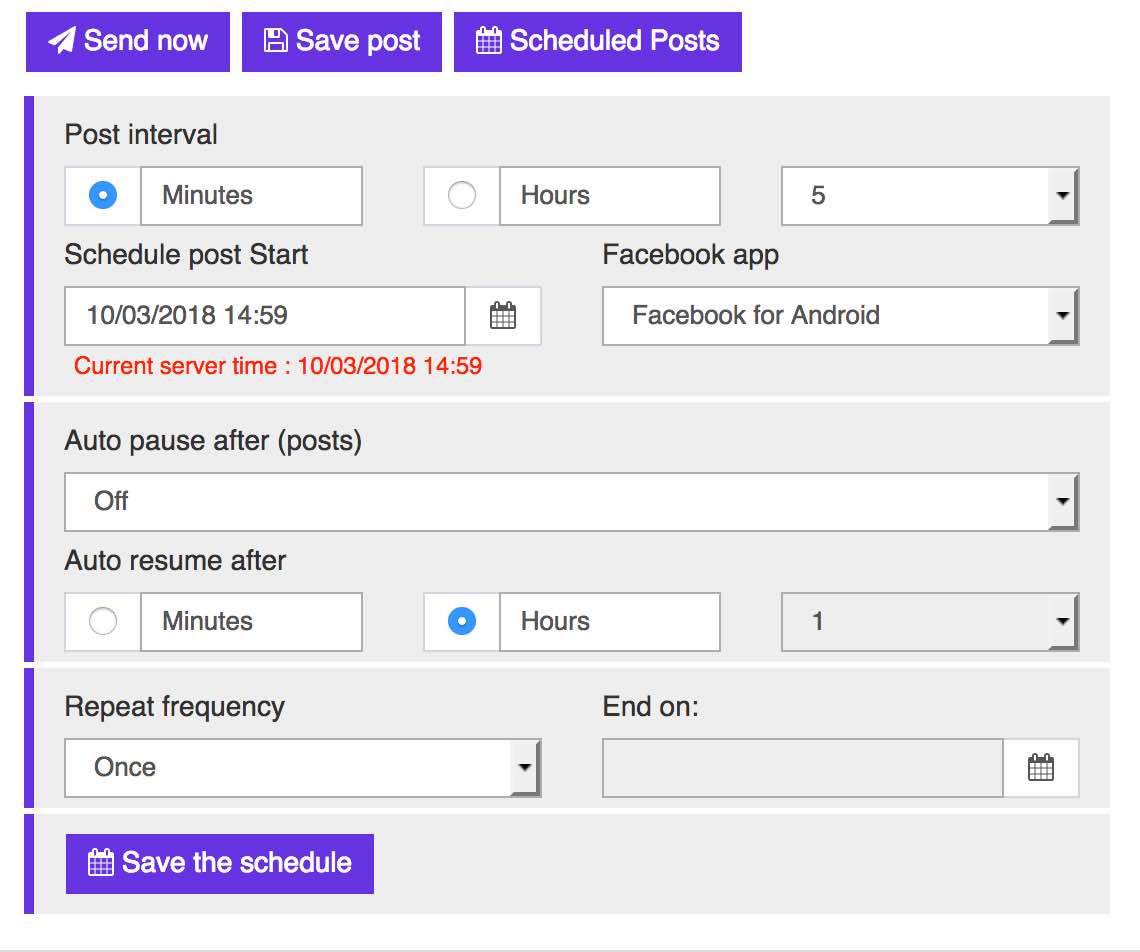 As you can see in the image above, We also have the Auto pause feature on MaherPost. By using that, You can choose to pause the posting for the selected time after selected numbers of posts are sent out.

Using all these features together will ensure that your posts are sent out at regular intervals without being flagged as spam by Facebook. So make sure to use them everytime you post.

There are several activities that Facebook prohibits on their platform and in spite of having a giant size of social media, it is monitored closely.

Before sharing content of someone else’s post, image or links, make sure they are not seen as abusive by other users.

If you provide a certain offline service to other users and group members, Instead of copying text/image of someone else’s business, try to write your own text and create/use your own image that is original.

The Facebook spam detector bans the accounts which violate their pre-set rules. Understanding the vital part of this rule, MaherPost is designed with plenty of features for avoiding Facebook jail and account bans.

With two options, you will be able to post unique content to all Facebook groups you are posting to. The first option is to allow Unique Post and the second one is Unique Link.

With Unique Post, MaherPost will automatically add a random short code to all your posts so all posts are seen as unique by Facebook and they won’t notice that you’re posting the same message over and over again.

The Unique Link, Is the same feature as the unique post. Where MaherPost will add a random code at the end of your links. That won’t change the destination of your posts but will make your posts unique. And Facebook won’t notice you posting same links all over.

Note: Don’t use Unique link if you’re posting short links from goo.gl or any other URL shorting service.

To learn more about this features and how to activate them, Visit this link: Steps to do before creating a post on MaherPost

Use Multiple Accounts to Post instead of Just one

This is a very important one. If you keep posting to the groups from the same account, you won’t be able to reach as many people and if you go overboard, that’ll just land you in the Facebook Jail.

Let me try to explain further. We recommend you post to maximum 50 groups per account per day. You can definitely go and post to 100+ groups from one account as well, But 50 is the safe spot.

But posting to just 50-100 groups won’t get you the best exposure on Facebook, So what do you do?

In reality, it won’t be possible to post manually to more than 500 groups in one day without taking notice of you by facebook police.

Note: With MaherPost Basic, Plus, or Professional plan, you can use the app with 1, 3, and 7 accounts respectively.

MaherPost has a special Facebook Auto Comment feature which will let you bump your posts always to the top of every group rather than keep posting similar content all the time.

To comment is safer than posting similar content every time. You just need the approval of one of your posts by a group administrator and after this, you can continue to bump this specific post every day and it would be getting to the groups top all the time.

Don’t do all at once!

MaherPost will allow you to run multiple works like Comment, post, Invite friends and Join groups. If you prefer to run all these actions, you are advised to pause one after another.

If you possess a running post schedule and want to do a comment bumping, it is better to either pause or enables the post schedule to complete running. This is because multiple actions running at the same time can trigger the Facebook spam system.

Give your posts a Fresh Look!

If you have a plan of running a marketing campaign on facebook groups, it is recommended to change the photo and shorten the URL if possible after some batches of a specific post.

It will offer your post a fresh appearance. It will render your post much more clicks as well as make it appear fresh to the spam detection system of Facebook.

As you already know that Facebook records all your works on their system, hence, it becomes your responsibility for making your post look real as much as possible.

The new MaherPost app even has a feature of a live preview of the post. This feature will let you see the live preview of how the post would look like after it is posted. This will give you an idea and you will be able to modify or alter as per your choice or needs.

Besides that, You should also make sure not to post to competitors pages. You might think that’ll get your business in eyes of competitor’s fans, But trust me, that won’t be the case.

Because the competitors will mark your post as spam as soon as they see your posts and if too many posts are marked as spam, you will land in Facebook Jail.

And that’s it. If you want to avoid being thrown into Facebook Jail and being blocked very often, Take a note of above points and make sure to keep them in mind when posting to Facebook groups and pages.